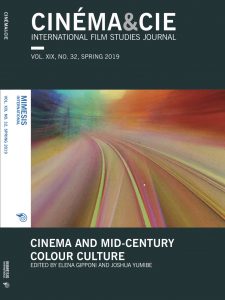 This essay discusses the production, funding, and circulation of Design Workshops (1940-44), a group of 16mm Kodachrome films produced at László Moholy-Nagy’s Chicago-based School of Design (formerly the New Bauhaus), to explore the role of colour theory and practice in the communicative agendas of Moholy and his corporate sponsor, Walter Paepcke, chairman of the Container Corporation of America. As a symptomatic foray into the midcentury category of ‘communication,’ the films collected as Design Workshops–at once documents of pedagogical theory and quasi-corporate messages–involved moving images both in zones of pedagogical experimentation and the more instrumental domains of public relations, packaging, and brand management.

In the case of Moholy-Nagy’s School of Design, colour experimentation and creative making in the synthetic materials of the post-war — Saran or plywood — were wedded to the inculcation of forms of democratic subjectivity (perceptual skills, epistemologies, creative capacities) that the artist saw as essential to post-war citizenship at mid-century. The essay demonstrates Moholy-Nagy and Paepcke’s overlapping investments in colour’s functional, communicative dimensions at the School, and argues that colour film production in Design Workshops fueled a vanguard humanities vision at mid-century. The essay reads Design Workshops as an allegory of that vision and its limits, performing the work and pedagogical theory of the School for potential donors and funding agencies like the Rockefeller Foundation.

"Conference Technique: The Goldsholls and the Aspen Idea," in Up is Down: Midcentury Experiments in Advertising and Film at the Goldsholl Studio, eds. Amy Beste and Corrine Granof (Evanston: Block Museum of Art, Northwestern University, 2018), 182-207.

This essay was commissioned for the exhibition catalogue for Up Is Down, a groundbreaking exhibition at the Block Museum of Art on the Chicago-based designers and filmmakers Morton and Millie Goldsholl. The exhibition was presented in conjunction with Art Design Chicago, an initiative exploring Chicago’s role as an incubator for innovations in art and design.

The essay discusses the Goldsholls’ film program for the 1959 International Design Conference in Aspen, whose theme was “Communication: The Image Speaks.” Exploring the range of expertise on moving-image media assembled at the conference, and the Goldsholl’s programming choices, I explain designers’ interest in film as both a managerial technology and a pedagogical tool. 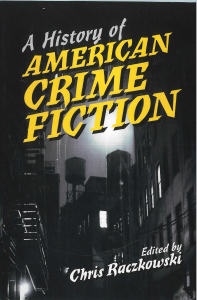 Ever since Raymond Chandler’s The Big Sleep (1939), those despairing crime melodramas of the film noir have struggled to name a shape-shifting, but pervasive “bigness.” The hard-boiled genre in particular has historically gravitated toward “bigness” as the perceived threat to masculine agency. This essay argues that the genre’s preoccupation with a threatening “bigness”–whether of a corporate elite, so-called experts, the spread of mass culture, gangster capitalism, or a newly interventionist state–is a sign of its abiding populist politics. Approaching hard-boiled writers through the shifting rhetorics of Left populism from the 1920s through the 1950s, the essay discusses, among other things:  the populist “smallness” of the pulps; the unstable New-Deal era appeal to the “common” man in the work of Dashiell Hammett, Raymond Chandler, and James M. Cain; the connection between between hard-boiled anti-fascism, anti-racism, and the Popular Front in the work of Chester Himes; and the fate of Left populism amid the rise of McCarthyite red baiting and the Hollywood blacklist. It ends with the bigness of midcentury corporate media empire in Kenneth Fearing’s The Big Clock.