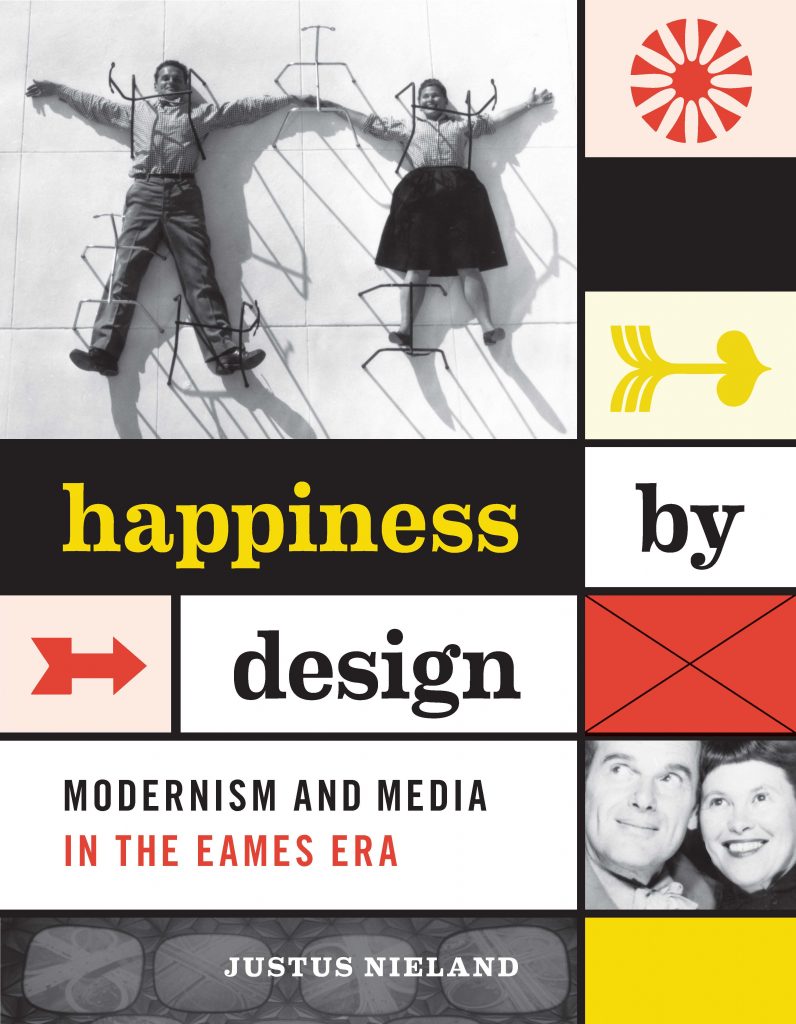 I’ve recently finished my fourth book, Happiness by Design: Modernism and Media in the Eames Era, forthcoming from the University of Minnesota Press in Fall 2019. The book discusses the film and media experiments of designers as part of a sweeping technical agenda of well-being at midcentury, when communication was in vogue. Through a far-flung media practice that expanded from the design of furniture and industrial film to vanguard knowledge production in classrooms, conferences, and beyond, designers in the Eames era reimagined film as essential medium for living amidst relentless change. At the dawn of the information age, they taught us to be happy in media, and transformed modernism in the process. 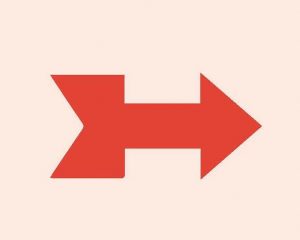 HAPPINESS BY DESIGN: MODERNISM AND MEDIA IN THE EAMES ERA

Happiness by Design offers a fresh cultural history of midcentury modernism through the film and media experiments of the designer, a profession with a new cultural prestige and world-historical mission in the Cold War period. Through the work of Charles and Ray Eames and peers like Will Burtin, László Moholy-Nagy, and György Kepes, the book traces a human-scale modernism that understood film as a medium of happiness within postwar designers’ promiscuous media practice. For good-life experts like the Eameses, happiness was both a technical and ideological problem central to the future of liberal democracy. Being happy demanded new things, but also vanguard approaches to production, play, and pedagogy that brought film into the purview of design.

While the midcentury is often viewed as the moment of modernism’s institutionalization and the canonization of a doctrine of medium specificity, this groundbreaking interdisciplinary history casts designers in the Eameses’ orbit as innovative media artists, technophilic humanists, change managers, and neglected film theorists. Eames-era modernism fueled novel techniques of culture administration, and spawned new partnerships between cultural and educational institutions, the state, and the postwar corporation. Assuming public roles worldwide as the face of the American Century’s exuberant material culture, Cold War designers engaged in flexible creative activity that spanned disciplines and crossed art and technoscience, while reckoning with the environmental reach of media at the dawn of the information age. When communication was in vogue, designers like the Eameses saw multimedia communication as the lifeblood of happiness and a technique for producing security in change. From the studio, showroom floor, or classroom to the stages of world fairs and the utopian knowledge work of international conferences, designer filmmaking helped midcentury media become a part of liberal-democratic lifestyle. In the process, Eames-era modernism anticipated the happy look and feel of our networked present of 24/7 communication 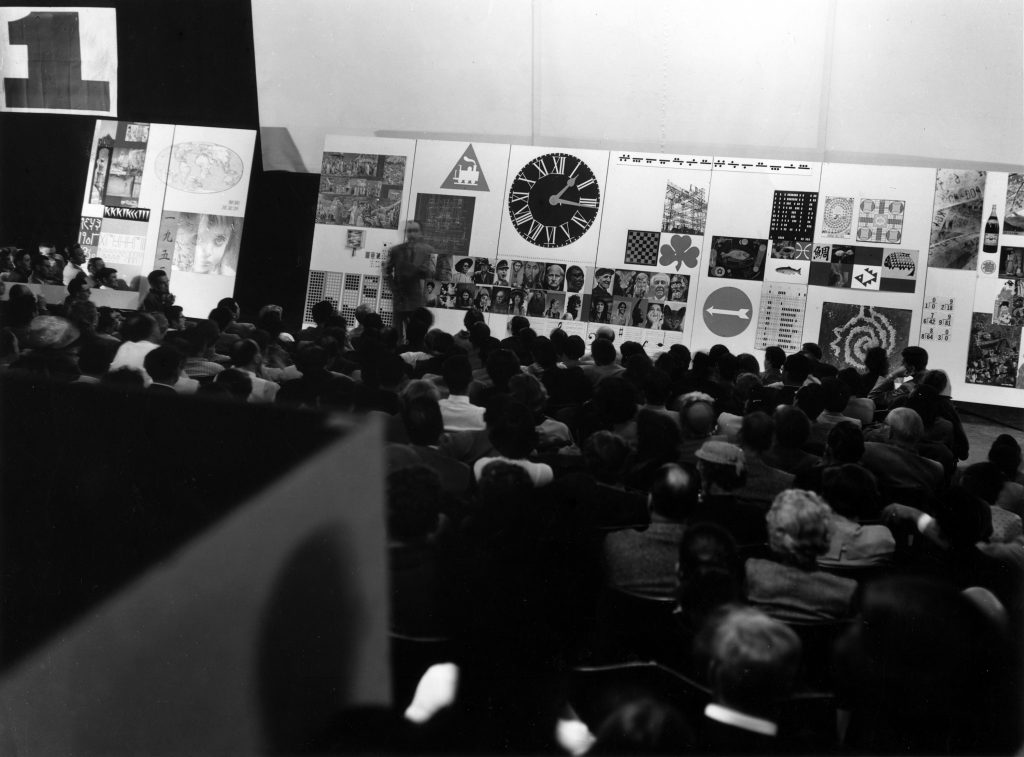 I begin with a new history and theory of designers’ film and media experiments in the Eames era as a midcentury modernism influenced by the postwar vogue for communication, and a technophilic technique of happiness in the Cold War. Here I discuss the Eameses’ landmark film A Communications Primer (1953) as the conceptual ground zero of Happiness by Design. 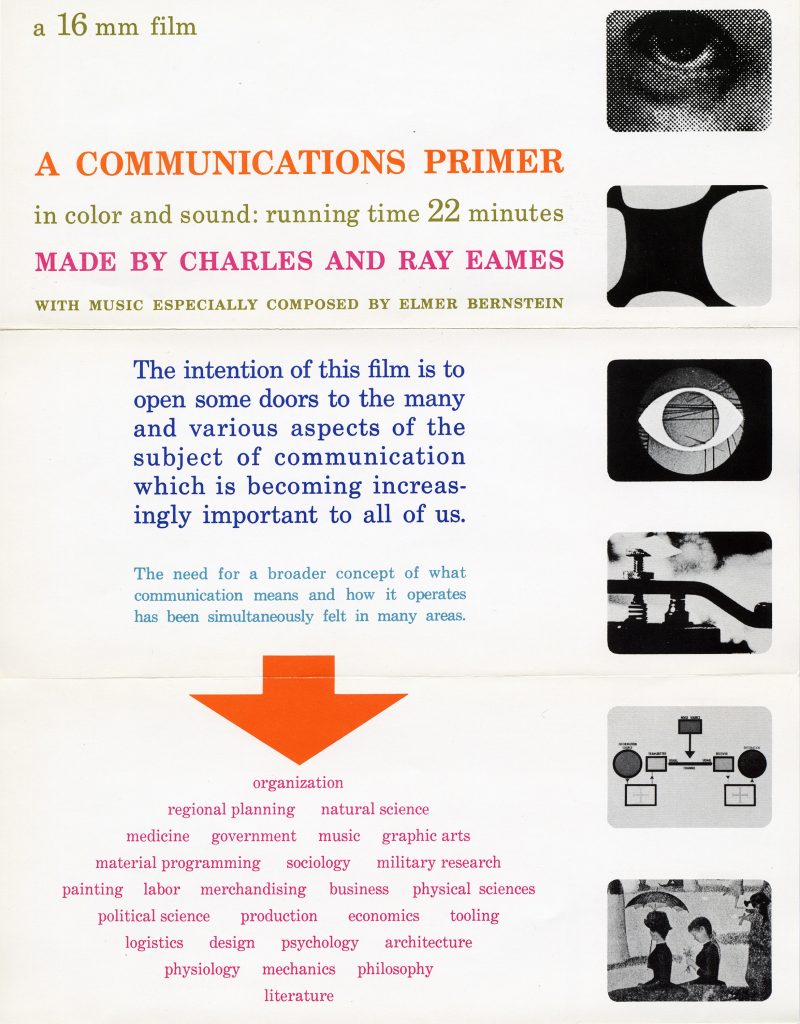 1 | Happy Furniture: On the Media Environments of the Eames Chair

The chapter describes how the Eameses expanded the scope of their design interests, and understood the modernity of their famous happy furniture alongside their growing fascination with moving-image media. I discuss a number of the furniture films the Eameses made for Herman Miller as allegories for happy living and happy making in the new media environments of the postwar period. 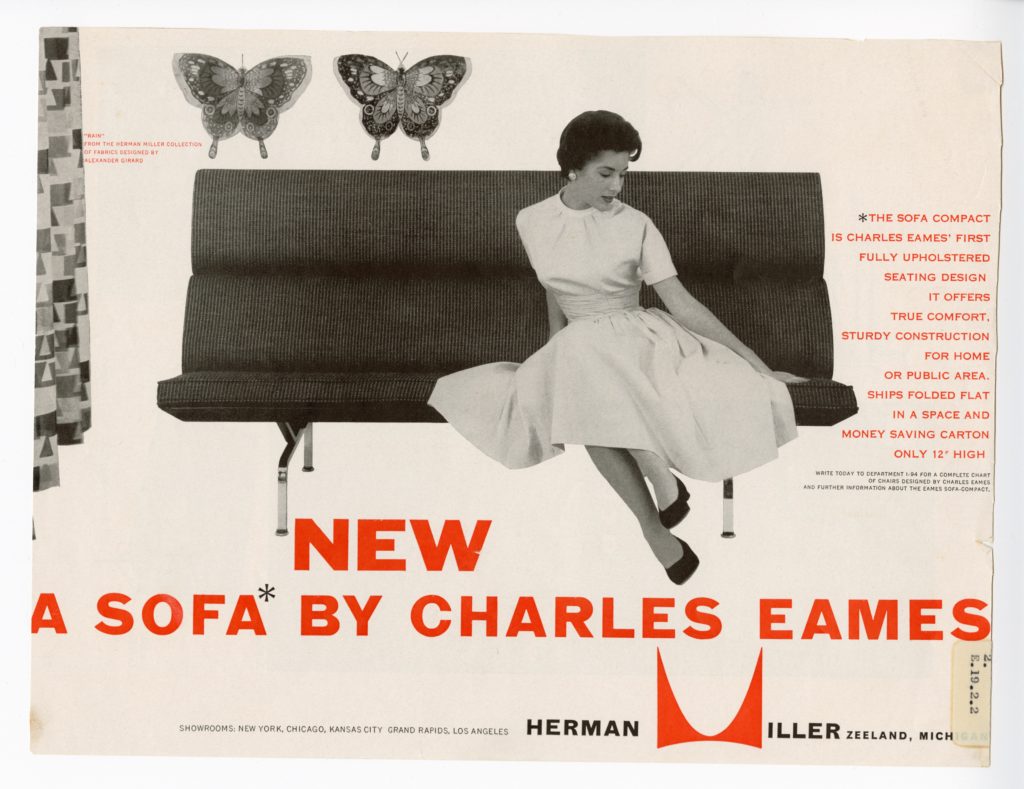 This chapter contextualizes the Eameses’ pioneering multi-screen works of cinema as pedagogical endeavors in a Cold War climate of educational reform marked by urgent designs on the happiness of student-citizens. It looks closely at the Eameses’ work in the classroom at the University of Georgia, UCLA, and UC-Berkeley in the early 1950s to offer an alternative genealogy of so-called “expanded cinema” discourses and their worldly, cosmopolitan ambitions.

This chapter offers a new institutional history of the role of film and media experimentation at the International Design Conference in Aspen (IDCA), a crucial institution for the midcentury merger of the corporation, the designer, and a late-Bauhaus aesthetic retooled for liberal-democratic happiness. The chapter focuses on the 1959 conference “Communication: The Image Speaks” as exemplary of the designer’s interest in film and moving images as managerial technologies serving a supposedly humane corporate internationalism. 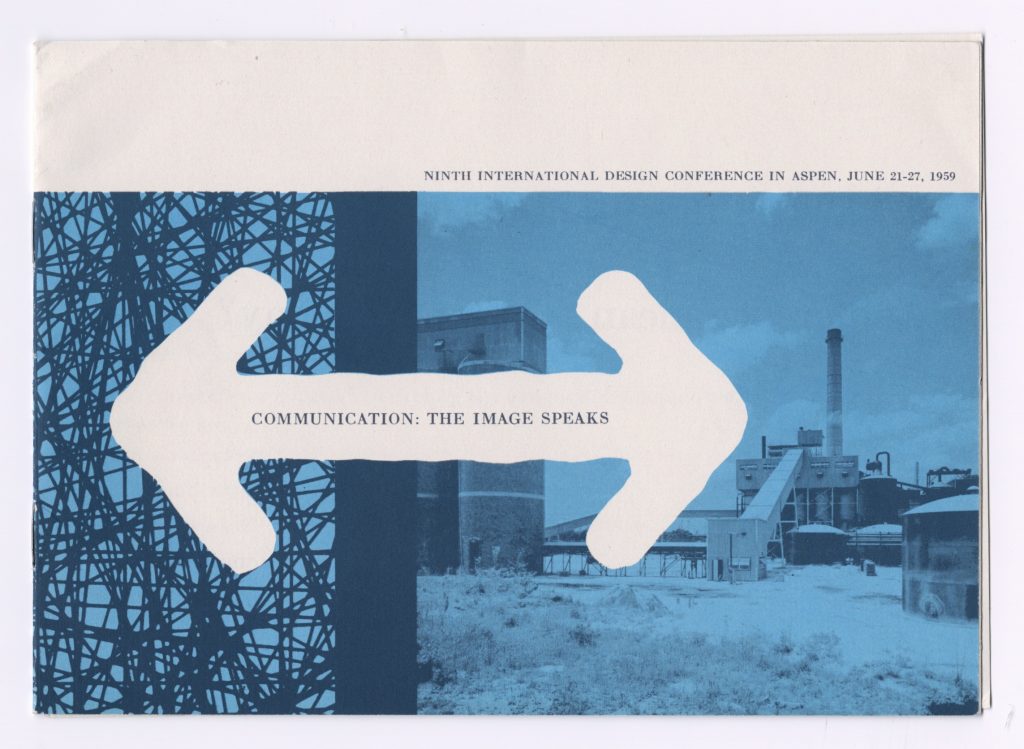 4 | Memories of Overdevelopment: The Vision Conferences and the Fate of Environmental Design

This chapter discusses designer Will Burtin’s Vision Conferences in 1965 and 1967 as interdisciplinary attempts to theorize and manage the explosive productive energies of the capitalist West. I focus on the conferences’ concern with the global emergence of unevenly developed communications media understood an “environment” in need of liberal control, and track the urgent political challenges to this mission given voice at the conferences. 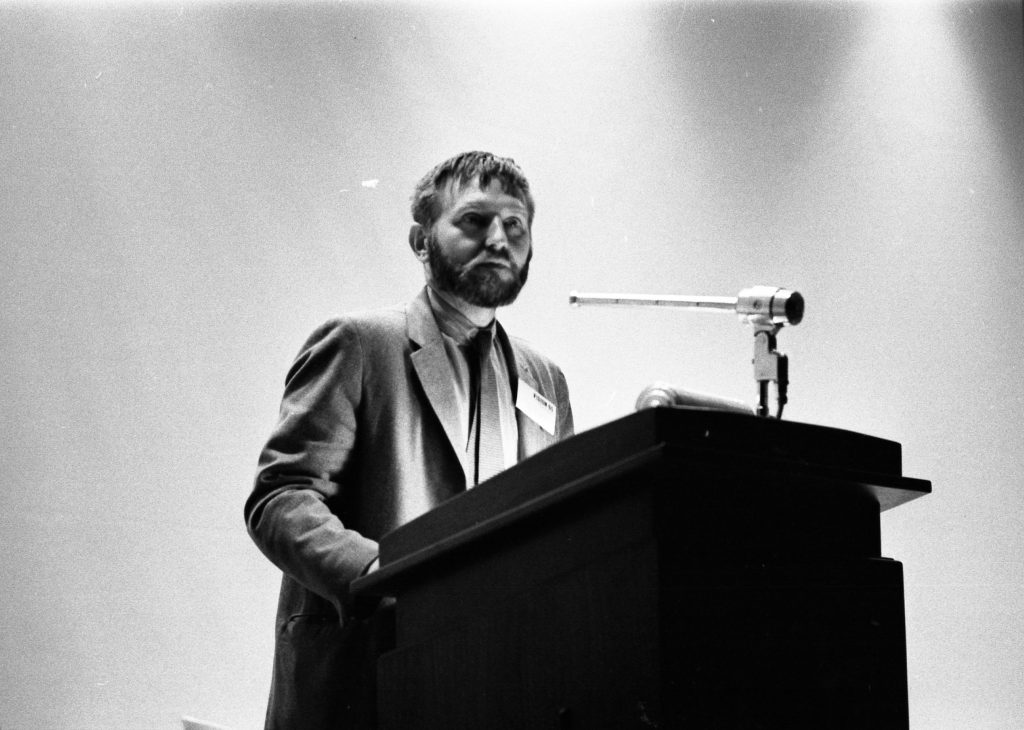 This chapter conceptualizes what has been implicit in previous chapters—a designer film theory forged in the midcentury’s interdisciplinary approaches to communication. For late-Bauhaus designers Lázsló Moholy-Nagy and György Kepes, film and moving image technologies were humanist media of postwar happiness, and a salve for a world of technological saturation and a seemingly transfigured nature. The chapter places their holistic, therapeutic media theory practice in dialogue with the concerns of “classical” film theorist Maya Deren. 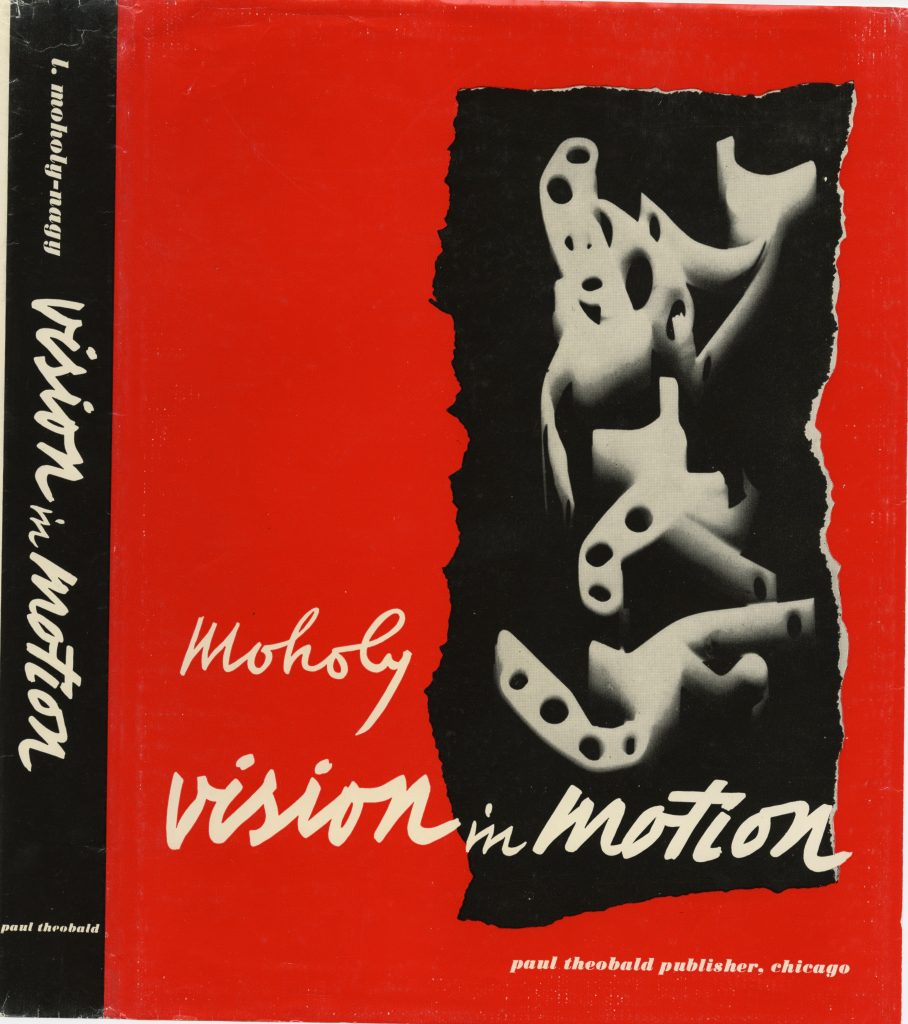 The chapter explores three overlapping sites of designer film theory’s encounter with midcentury information theory and new technologies of information management: the writings of film theorist Rudolf Arnheim; the curriculum in media theory at the Ulm Institute of Design in Germany, where the work of Arnheim and other film theorists was taught; and the domain of so called “political modernism” in the 1960s and 1970s, which I recast as a related pedagogical program and vanguard formalism. 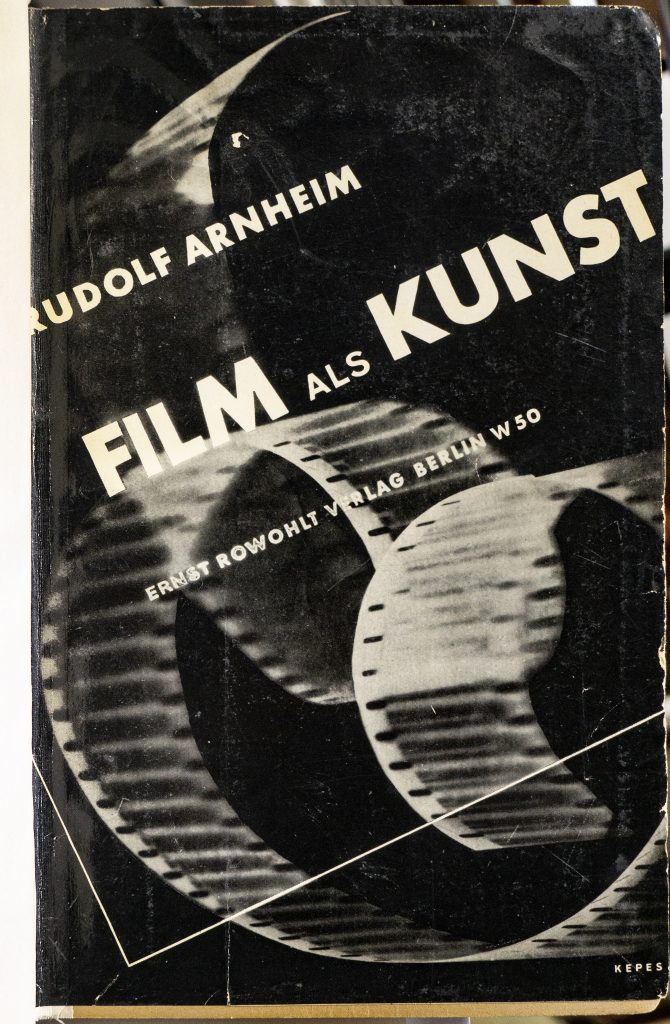 At the end of the Eames era, the coda meditates on the succession of critic Lionel Trilling by Charles Eames as Norton Chairs of Poetry at Harvard University in 1969 and 1970. I compare the assumptions about happiness underlying their media poetics, and track a movement from an unhappy modernism of subjective authenticity to a designer modernism concerned with creative problem-solving, communication, and informatic dexterity in networked environments.